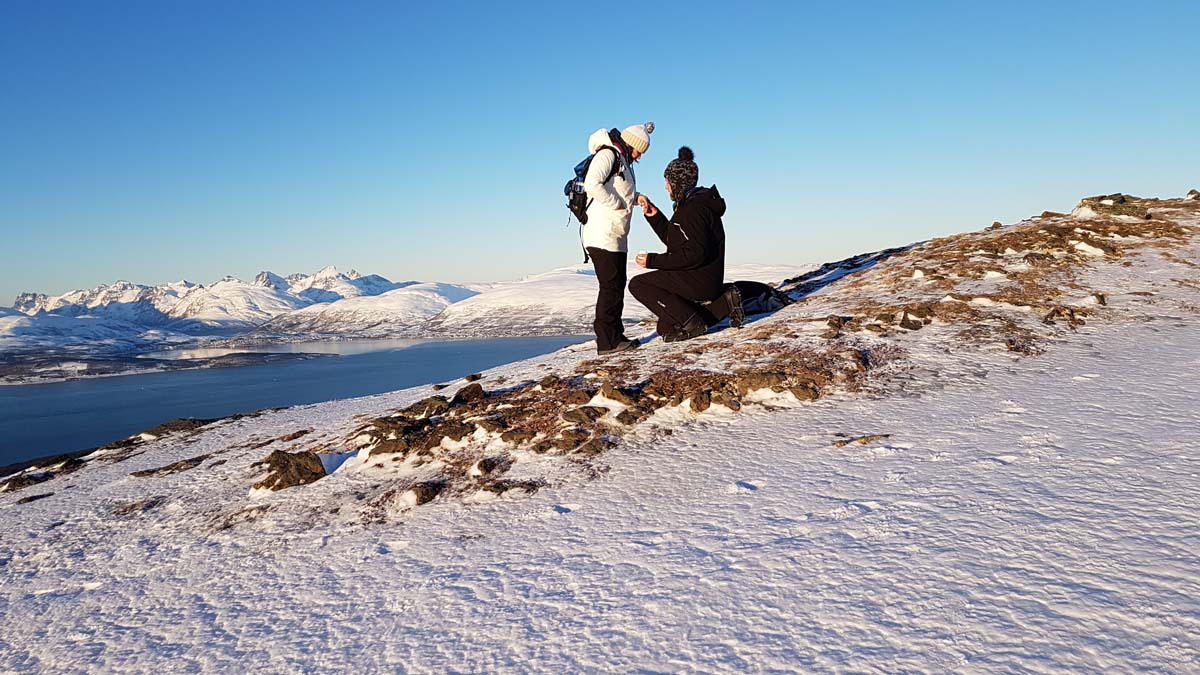 Is there any better place to ask the love of your life to marry you than on the top of a snow-covered mountain? Outta space maybe? It’s a date that this lucky guy will never forget. It was Tuesday 7th February 2017 and they were in Tromso, Norway. The sky was blue, the snow was white, the temperature was around -10 and there was definitely a whiff of romance in the air.

We asked him his thoughts about the whole process now he had some experience in the matter. He said;

Asking somebody to marry you is a big deal, well it was for me anyway. You cannot just blurt it out, out the blue, as it could lead to some awkwardness. What if they don’t hear you properly; “What, What was that?”. Or what if it comes out wrong and they think you’re joking. So there has to be some planning, you know, build it up a bit so there is no way there can be any ambiguity in what you are saying and no way what you are asking can be misinterpreted as anything other than; this is the big question and I mean it.

I have been lucky enough to have spent a lot of my time with one of the most beautiful women in the world. I mean, there’s a lot of them out there, but this one is special. What are the chances that the perfect girl for me would be living just around the corner and that our paths would cross and she would turn out to be ‘the one’? Very slim I think, but it happened and it was the best thing to ever happen to me. So this question I want to ask, is the most important question I have ever asked anyone, so it’s best to get it right…right? I mean, you cannot ask it again once the cat is out.

The ring, oh my gosh, the ring. This was another thing that could have scuppered the whole deal. Because I am very sneaky, I was able to ask some probing questions without setting the alarm off about what type of rings she didn’t like, what colours she did and what colour metal, which left me with a pretty good idea of what type of ring to buy, or not to buy. Now, the ring size. How do you know what ring size to get? If they have a ring already, happy days, get it measured, Boom!. What if there are no other rings? Yes, yet another predicament. I managed to do it by going into H Samuel about a year before and asking her to try on the ring size gadgets they have in these stores, “just to find out what it was, just in case”. I just laughed it off at the time but made a mental note of the letter. So I had the size, the likes/dislikes and that was enough.

Ordering the ring was easy, hiding it in the flat even easier. I packed it away in my suitcase (in a sock it was, in its ring box) and hid it under many items of luggage. Hopefully, my luggage would not get lost! Hopefully, I would not be asked to open my luggage up in customs, in front of her. Hopefully, she wouldn’t find it necessary to search through my luggage whilst I’m in the bathroom. All these things ran through my mind. But none of it came to pass.

I had run through a few hundred scenarios of where is best and how is best but you have to choose one and I chose that it would be awesome if I asked whilst on our trip to Norway, underneath the northern lights (if we saw them) would probably be the most epic, but its a long shot as you are not guaranteed to see them.

We touched down in Norway at 8 pm on Monday 6th February, the skies were dark and very clear so we headed out to see if we could catch a glimpse of the northern lights. We were very lucky and saw them within 2 hours, but I hadn’t brought the ring with me as I didn’t get the chance to unpack. An opportunity lost!

The next day, the big day, started off with clear, crisp sunshine and magnificent views. We had decided that it would be a good idea to take a look at our surroundings and to go up on the cable car.

We took the cable car up to the top of the mountain which overlooks the city. The sun had not risen above the mountainside at this point, but it was beautiful. I had the ring in my backpack and was nervous. I wanted to get the ring in the sun, so it would really sparkle. The only way this was going to happen would be if we were to trek up the side of the mountain to its crest.

It took about 30 minutes to ascend, I remember being out of breath when the sun hit me in the face. My face was cold and the sun was warm, it was nice. By this time I was quite a way ahead and had time to set my tripod up and attach my phone to it. I have a watch that a remotely set off the camera, so it was all ready.

Shortly after that we were reunited on the top of the ledge and ate our sandwiches we had nicked from the hotel at breakfast. The ring was still in my bag, in a sock at this point and as we had finished I started to fumble around in my bag, trying not to reveal what I was doing, my heart was pounding and I was shaking a bit.

I managed to wrestle the box out of the sock, out of my bag and into my pocket. I had a sweat on by this point. I was seated, so I got up and gave her a cuddle and commented on what a wonderful view it was. I then turned to her and told her that she looked beautiful and that I was glad she came all this way to stand in the freezing cold with me. I said that she was the best thing to have happened to me and that I loved her and I wanted to spend the rest of my life with her and fell to one knee, popped the ring box out of my pocket, flipped it open and asked her the question.

The ring was sparkling bright as were the tears running down her face. I was steadfast and emotionally strong of course, it was cold wind blowing over the mountain that was blowing right in my eyes which made them water slightly. She looked down at me and said: “Yes!, yes, of course, I will marry you”. I have never felt so happy.

We stood there for a while, in a bit of a daze I think, before we finally set off back to the cable car to continue our holiday. Although brief, that moment will live with me forever.

After arriving back at the hotel and after having a cup of tea, it was time to break the news. First calling our parents and then close family before the whole thing was unleashed on the very popular social networking website for all and sundry to see.

We each have a big family and news travels fast so it wasn’t long before messages were coming in from all over the place, it was great.

When we arrived back from our trip to Tromso we opened the living room door to find that our parents had decorated the room with balloons, flowers, love heart confetti and bottles of fizz, which was absolutely awesome and very unexpected.

The whole event, as I look back on it sometime later, seems like a bit of a dream. Except when I get home this evening, and for every evening from now on, I will come home to somebody wearing the ring and realise that the dream has actually come true.