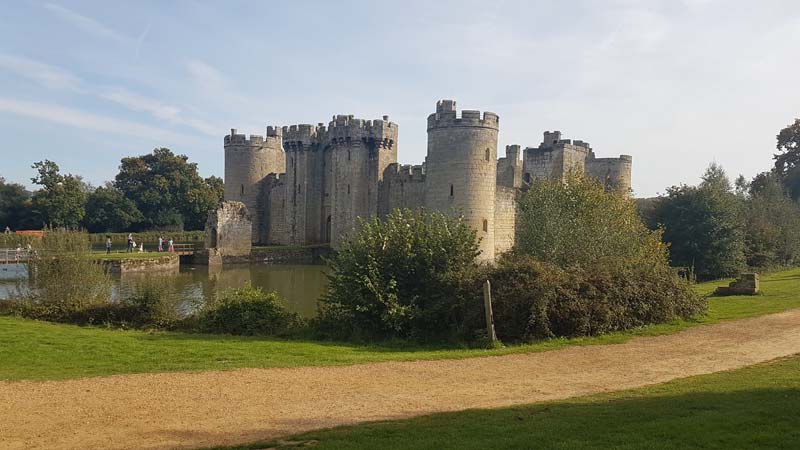 Newenden, a small village and civil parish in the Ashford District of Kent is situated on the River Rother, six or so miles south-west of Tenterden. Newenden is famous for being the birthplace of cricket and used to be a bustling port with a big market, thriving economy and sixteen (yes 16!) inns. Today though, it’s just a small and friendly village. Surrounding the village is some of the most beautiful rural landscape in the South-East with the centre of the village being a conservation area in its own right.

One of our Bashington Post correspondents was in the area and bumped into a family on a special day out. They were celebrating a 21st birthday and were about to embark on a river cruise from Newenden all the way down to Bodiam Castle. The sun was shining and there wasn’t a cloud in the sky, so we hopped on the Dannie Lee ferry with them and pootled down river to the castle.

The journey is very relaxing and takes around 45 minutes each way. Our skipper for the day was young lad going by the name of Greg. He not only did a great job of steering the boat down river but knew his stuff, he spoke about the history of the surroundings as we chugged along. It was quite difficult to hear what he was saying from the back of the boat where the engine was (probably a blessing) and he gave up after a few minutes. I am sure it was all factual a very interesting, but it was much more pleasant (and peaceful) meandering through the beautiful countryside without the added waffle.

It’s 3.8 miles from Newenden to Bodiam Castle and the cool breeze coming off the river was just right. It wasn’t long before the castle was in sight and time to come ashore.

Bodiam Castle is near Robertsbridge in East Sussex. It was built in 1385 by Sir Edward Dalyngrigge to defend the area from the French invaders. Set in the heart of an historic landscape, with spiral staircases, battlements and a portcullis this 14th-century castle is one of Britain’s most picturesque and romantic ancient monuments.

We spent a few hours mooching about and had a champagne birthday lunch which was very nice. The time flew by and it wasn’t long until it was time to head back to the Dannie Lee where Greg was waiting to take us back to Newenden.

Arriving back where we started, we decided to have a cake and a cuppa in the Lime Wharf Cafe before heading home. The perfect way to end a perfect day.