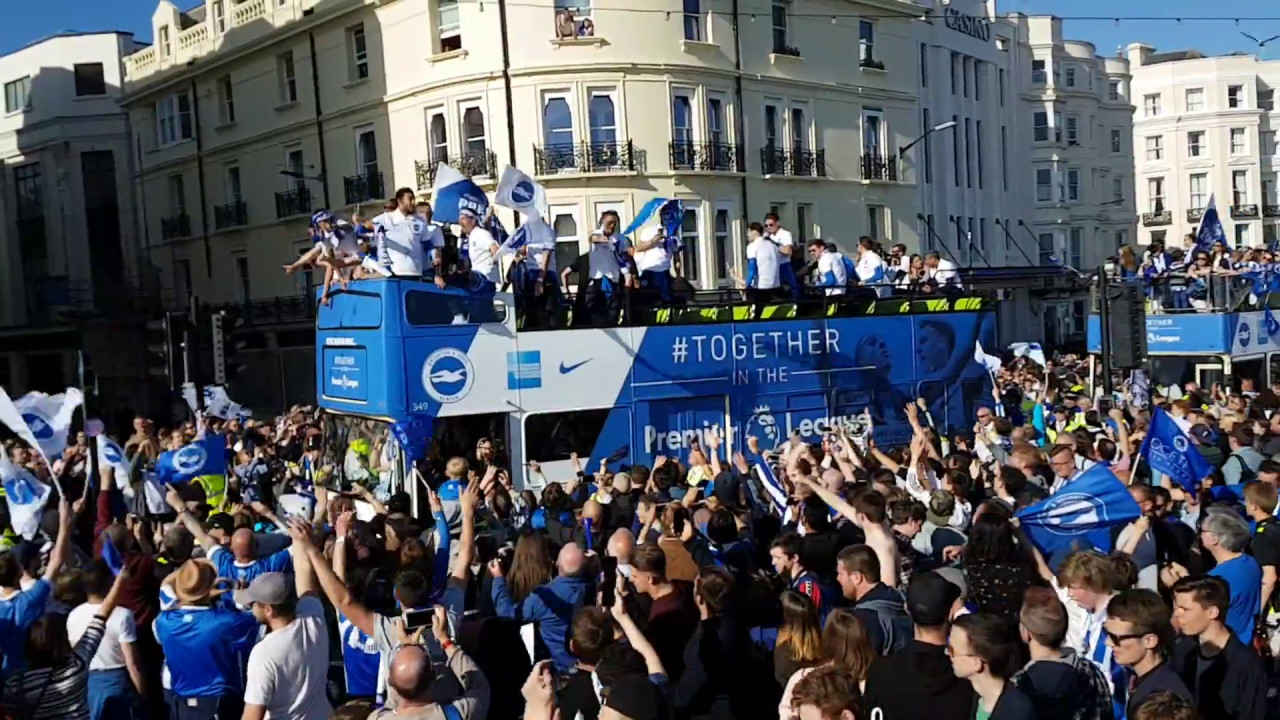 It was a big day for these two football fans as their local team gets promoted to the premier league. Brighton and Hove Albion narrowly missed out on getting into the premier league last season but this time did it in style. The seagulls had the chance to win the Championship, three times, but in the end, they were pipped to the top spot by Newcastle United. We followed these fans into Brighton to celebrate the promotion and managed to get a brief interview in which they said;

We arrived in Brighton at about 1:00 pm, it was sunny and you could feel the excitement in the air, there were Brighton and Hove Albion fans all over the place, all wearing white and blue. By the time we arrived, it was lunchtime so we headed straight to our favourite hot dog van in Churchill Square. A big fat juicy Bratwurst with onions and red sauce for starters with a few pints ciders for dessert and we were set. Meandering through the streets and lanes of Brighton we made our way to the seafront where the parade was due to start. The word on the street was it was starting at 5:00 pm so we took our time, went into a few shops to grab a bargain and as there always seems to be in Brighton, there were people handing out free stuff! This time it was free shampoo and conditioner with an offer to enter a trailer to have your hair platted. So why not and it wasn’t too long before were stood in line waiting for a slot.

The time soon passed and it was time to hit the promenade to catch the procession. It was busy but not too bad to start with and then we saw the line of police vans all with their lights on followed by a few policemen on horseback, safety first. Just behind them was a line of 4 or 5 buses and a sea of Brighton and Hove Albion fans following alongside and behind. It didn’t last long and shortly after we headed back into town as nature was calling and then headed home.

It was a great moment for all involved and our cameraman got the best view of it, risking his own life, dangling from a lampost. Enjoy our exclusive footage of the event. Up the Seagulls!