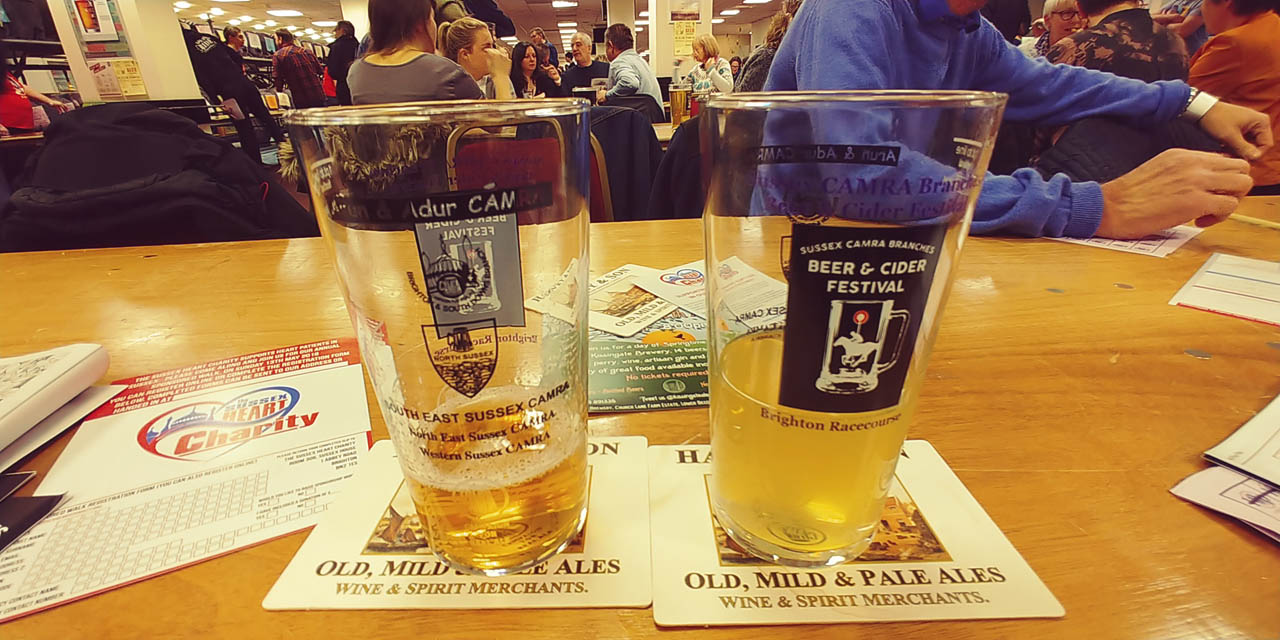 Having colleagues at your place of work that volunteer at beer festivals has its perks. Not only do you get to hear about the beer festivals going on (they are going on all the time) but if you go along, you discover a whole world of beers, ales and ciders (there are thousands of them) and some of the interesting characters that attend them (there are thousands of them too). There is literally a beer for every taste, as these two light-weights discovered when they were invited along to the Sussex Camra Branches Beer & Cider Festival at Brighton Racecourse.

The Brighton area is littered with breweries, some of the most famous are Harveys of Lewes, Burning Sky of Firle, East Sussex, Bedlam of Albourne, West Sussex and The Top-Notch Brewing Co of Haywards Heath to mention only a few. There are over 60 established breweries in East Sussex which is great news for ale drinkers. We managed to grab a cheeky half with this couple who were attending their first beer meet of 2018 at the racecourse and this is what they had to say about their experience.

We had never been to this festival before but had been informed there were plenty of good ales and ciders from the local area in attendance. After paying the entry fee, I think it was £10 you get given your glass (which was surprising as most events don’t trust people with glass anymore) and directed to a booth where you could buy ‘tokens’.  Tokens come in the form of sheets of paper with a grid of 10p symbols. Each sheet has 50 boxes. We started off with 4 sheets each. The programme we were given listed all 170 beers and all 20 ciders which were a good read in itself. Some of the names the brewers give their concoctions are very funny. Black Jesus, 99 red Baboons, Funky Hop Donkey Big Funky and Oh Betty were a few of our favourites.

As the ale and cider start to flow people begin chatting with one another (mostly about beer and Brexit) and everyone has a jolly good chin wag.  The atmosphere is very relaxed with people pottering, laughing and joking. Food was available too with a burrito stand, beef jerky stand and some others selling pies and other manly things. The festival spanned two big conference halls (which we only found out when we ventured out of the one we saw first to try to find some grub, as we saw people coming back with chips and burritos).

We enjoyed tasting all the ales and ciders and were surprised at just how many different options there are. Mango cider is something you don’t know exists until you get to one of these events, we will definitely be trying that again for sure. Brighton also put on a shuttle bus service for people to get which took people into to town, which was a nice touch.

The whole evening was really relaxed and by the end of it, we were smashed. But hey, it would have been a little strange if we left sober. Right!

Yes, we couldn’t agree more. Check the CAMRA website for more details on upcoming events in your area and help support the “Campaign for Real Ale”!